Stay tuned to this page to see updates on the current municipal election.

Many view local government as the basis of democracy. At the municipal level, town citizens can most easily contact their elected representatives.

This allows citizens to take part in governing their communities as they inevitably know their own needs much better than anyone else.

Thank you to all those who have put their names forward to serve on Council.

Good luck to all candidates! 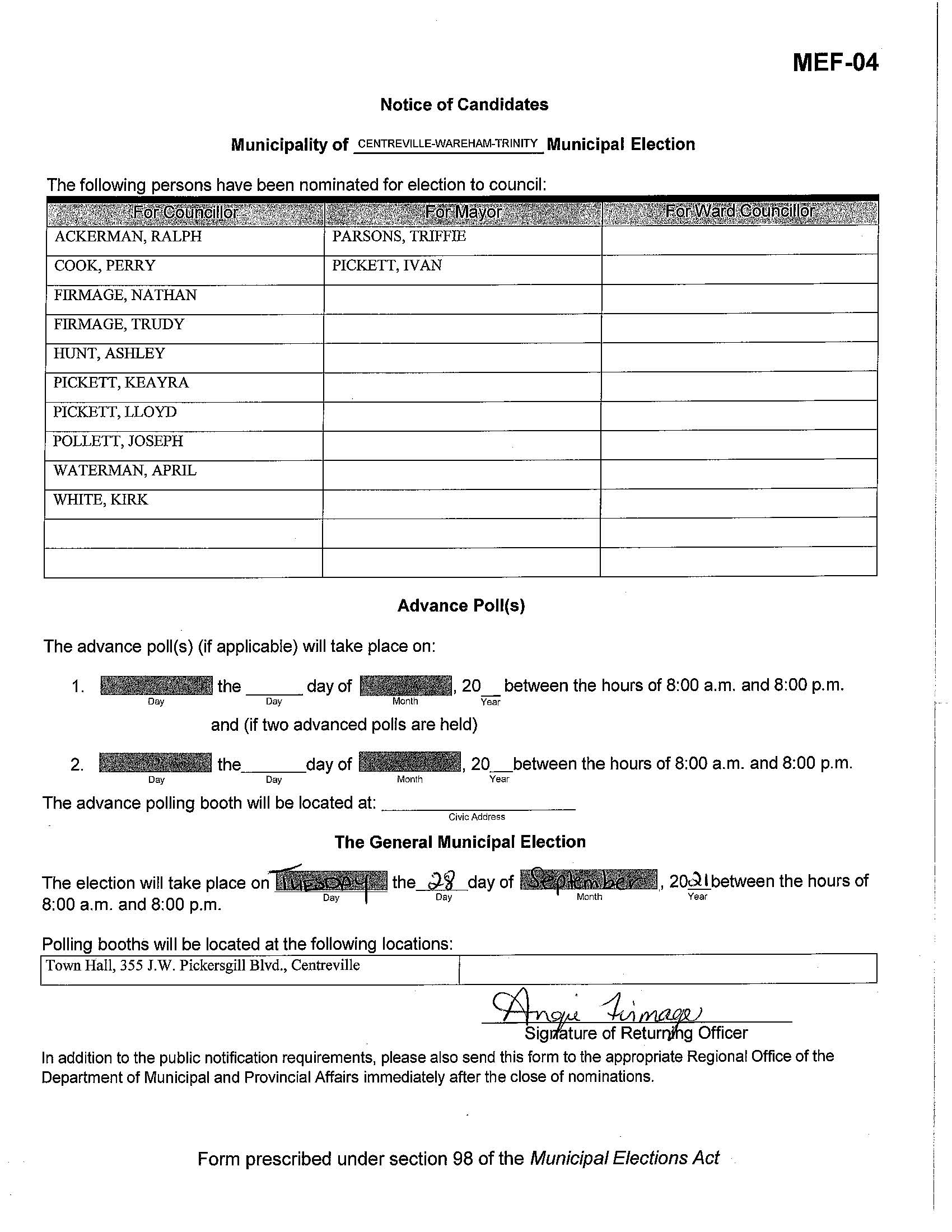 About Municipal Government in Newfoundland & Labrador

A local level of government has responsibility over matters directly related to local communities. Like other levels of government, local governments have political leaders and institutions such as mayors, councillors, directors, agencies, boards, commissions, committees and managers. It is at the municipal level citizens can most easily contact their elected representatives, allowing citizens to take part in governing their communities as they inevitably know their own needs much better than anyone else. Many view local government as the basis of democracy.

Local government is also a training ground for those who want to further participate in the political process. Many members of Parliament and provincial legislatures were first elected at the municipal levels. In particular, representing citizens and deciding among conflicting demands for scarce council resources are useful learning experience.

The most immediate role of municipal government is the provision of services. It is only at the local level that citizens can decide for themselves the nature and extent of services for which they are willing to pay. Local government allows for a greater degree of flexibility than is the case if decisions are made by centralized agency of the provincial government.

Responsibilities of a Municipal Councillor

Municipal councillors have a responsibility to provide balance in decision-making, for sound financial oversight, effective communications, to maintain relations with other levels of government and to comply with relevant legislation.

Balance what is best for the community- Not deliberately or consistently ignore public opinion, or alternatively, blindly follow public opinion.

Being elected to your local council means a big time commitment on your part. It’s important not to underestimate the amount of time and dedication required to be an effective member of council, especially if you have a full-time job as well.

If elected, you will serve a four-year term. During that time you should plan to attend the following:

Regular and special council meetings;
Meetings of council committees;
Meetings of other boards and agencies as a representative of council;
Conferences, seminars, workshops, and conventions for training and discussion; and events that promote or represent your municipality.

You may also need to spend a significant amount of time talking to the public, businesses, colleagues in other municipalities, municipal staff and your administrator. Continuing interaction with these groups is an essential part of making an informed decision as a council member.

It’s not crucial to have education or experience in a government setting to run as a candidate. You likely have skills, knowledge and abilities that are transferable to the elected official’s role. You may want to undertake a self-assessment of your skills prior to running for elected office. Think about your:
– volunteer experience
– community involvement
– work experience
– membership in different organizations
– family life

Often your experiences have taught you how to:
– work as part of a team
– organize and prioritize
– make decisions
– debate
– lead

Qualifications of Candidates
In order to run for council, an individual must:
– Be eligible to vote in the municipal election.
– Not be in arrears of taxes or other charges payable to the Town of Centreville-Wareham-Trinity.
– Be ordinarily resident for a period of 30 days before the commencement of nomination day.

A candidate shall be nominated by persons eligible to vote in the Town of Centreville-Wareham­ Trinity. The nomination shall be in writing and in the required form. It must be signed by the proposer and seconder, both of whom shall be present together with the candidate who shall also sign signifying his or her acceptance. MEF 02 Nomination Form and Declaration of Qualifications by Candidate.

Qualifications by Candidate
If a candidate is unable to attend his or her nomination, the Returning Officer may accept, in the required form , a declaration to that effect from one of the candidate’s nominators together with a declaration from the nominator that the candidate possesses the qualification required by the Municipal Elections Act and accepts the nomination. (MEF – 03 Nomination Form for Candidates Unable to be present on nomination day).

A fee in the amount of $10, is required at the time of nomination and is not refundable.
As soon as the nomination paper is filed, the information about an individual’s candidacy becomes public information.
Withdrawing Nomination – A person who has been nominated may withdraw his or her nomination by filing with the Returning Officer a written withdrawal and the nomination fee is forfeited.

Voting Procedures
Who can be at the polls? Election Officials, Candidates, Agents (authorized in writing, not exceeding one agent for each candidate) and the Voter (actually engaged in voting).

Election Results
The election results will be issued by the Town of Centreville-Wareham-Trinity. Ballots cannot be counted until polls close at 8:00 p.m on Tuesday, September 28″, 2021.